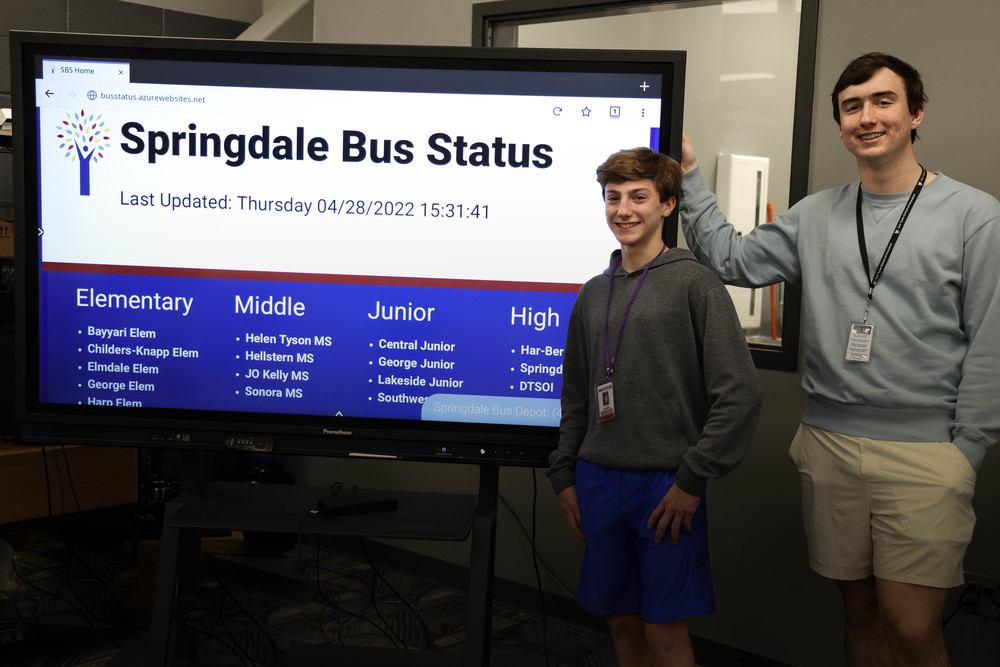 Two Don Tyson School of Innovation Computer Science students used the skills they learned in class to create a real-world solution for the school bus riders of Springdale.

“I told them that I wanted them to create something real and practical for our school,” Mabie said.

The Programming class has mixed grade levels and a mentoring program in which Level 3 students work with Level 1 students on team projects. Mabie selected eighth-grader Joseph to partner with 12th-grader Lucas at the outset of their assignment.

The students chose to address the issue of bus cancellations as a result of Joseph’s frustration with trying to keep up with the latest updates.

“I got an email about buses, and so I just suggested ‘what about this?’” Joseph said, who could see messages for all canceled district buses. “I had a thousand plus emails that said ‘this bus isn’t running, or that bus isn’t running.’”

The students worked with the district Transportation Office, which provided them access to information on daily bus cancellations, Mabie said.

Staffing is a challenge for many during the COVID-19 pandemic, and the Springdale Public Schools Transportation Office is no exception. Hiring bus drivers is a monumental concern for the district, and the district continues to have personnel shortages that are impacting reliably getting more than 15,000 students to school daily.

Springdale Schools had as many as 10-15 district bus drivers absent per day at the height of the pandemic, resulting in an average of 10 routes per day that were unable to receive bus transportation for the 2021-22 school year.

Driver shortages and route cancellations create unpredictable transportation for students, causing families to have to adjust last-minute to ensure safe transportation to school. The ripple effect in the community has a major impact.

Schools often rely on emails and social media messages to communicate last-minute bus cancellations to families. The website offers a one-stop solution for all district families to access information on bus cancellations.

The partnership of students of different computer science experience levels was key to the project’s success.

“I knew Lucas’ level was pretty advanced, and I knew he could do it,” Mabie said. “I was nervous about a Level 1 taking on that task. Lucas, as his mentor, was tasked to guide him and not do the work for him...I know Joseph is a fast learner, and having Lucas as a mentor would bring his idea to life.” 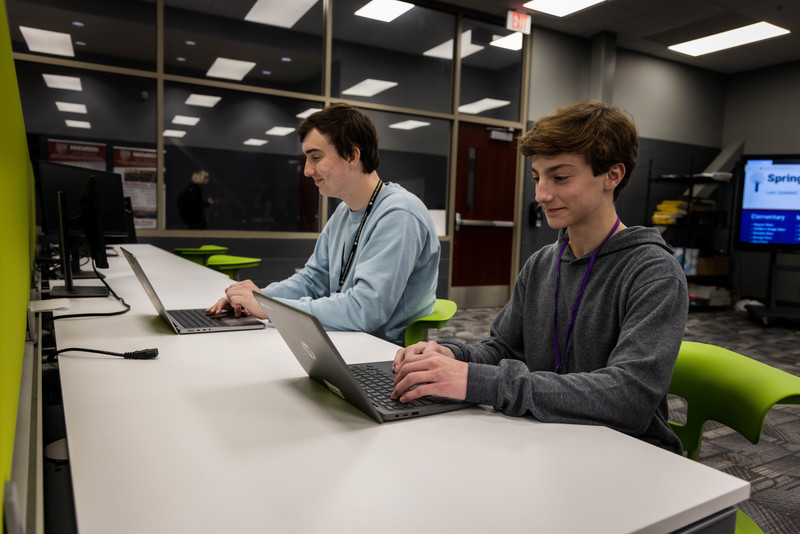 Once Joseph and Lucas settled on their idea, the duo started planning the design of their website. After that, they moved on to creating their program using Python, a high-level, general-purpose programming language.

“I wasn’t entirely sure how we were going to create pages for every school,” Joseph said. “There are so many schools!”

Springdale Public Schools is the largest district in Arkansas with 31 schools and more than 22,000 students.

The students had to decide whether they were going to create a website in which each page would need to be updated manually or if the pages would be generated by a web application on demand. They decided to use Ginger, a framework that generates code for websites.

“Initially we thought we would make a static website,” Lucas said. “Every hour, the program would generate a static page. It worked, but it was inefficient. But with Ginger, it's a templatic framework, and instead of having to manually write out each school, we can just instruct the program to create a new page for each list item.”

Lucas started programming in the seventh grade and spent a few years learning on his own before enrolling at the Don Tyson School of Innovation. He often uses class time to work on personal projects, he said

“Mrs. Mabie lets us build what we want to build and explore our interests,” Lucas said. “It’s good that we can all go on our own separate paths and see what areas of computer science we want to explore.”

Lucas was team captain for Mabie’s coding team at the invitation-only state competition, where his team won second place. He was also selected as a National Merit Scholarship Finalist earlier this year. 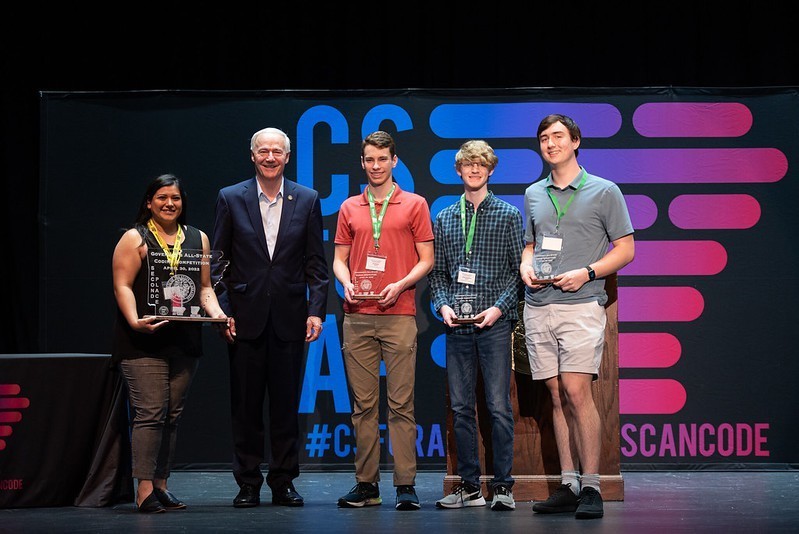 Joseph started computer science classes in the sixth grade at DTSOI. He started pencil coding and said he found the process interesting and fun. He continued the following year with two Computer Science classes, one for making video games and another for creating websites. This is his third year studying Computer Science.

“I’ve learned a lot from Lucas about just pulling data from websites,” Joseph said. “We pull data from Google Sheets, and I didn’t know anything about that before.”

Lucas said he was able to expand his abilities with deploying programs for real-world use, meeting requirements and working with people requesting website features.

“I’m just blown away at the hard work that Joseph put into this project. I’m really excited to see what he comes up with in the coming years,” Mabie said. “Lucas is a senior, so I will be losing him. I’m excited to see what he does in college and in his career. This is by far one of my favorite student projects this year.” 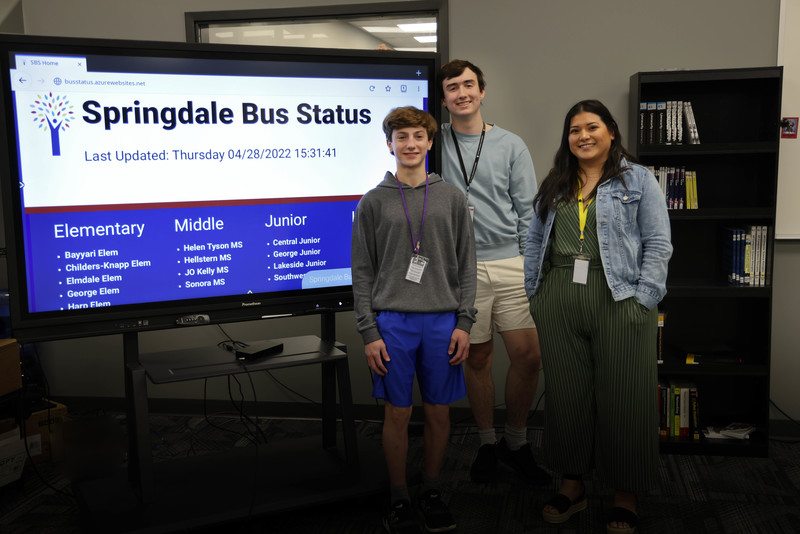