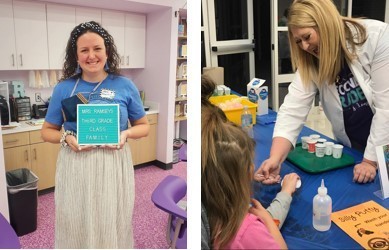 Two Springdale Public Schools teachers are once again state finalists for the Presidential Awards for Excellence in Mathematics and Science Teaching.

“It is an honor to represent my class family, Rollins Elementary, Springdale Schools and Arkansas as a PAEMST finalist,” Ramsey said. “Dr. Rollins always said that he ‘believes in the children, their future and their potential,’ and I am grateful to carry this legacy on in my own classroom.”

Jim D. Rollins was the district superintendent for about 38 years and currently serves as the president of Northwest Technical Institute.

Ramsey has been an educator for nine years, all of which has been with Springdale School District.

Long has also served her whole teaching career with the district and has taught at Turnbow Elementary her entire 12 years with Springdale Schools.

She said it’s exciting and humbling to be a PAEMST finalist, adding she was also selected as an award finalist in 2020.

“This nomination is especially meaningful because my father was a 1996 PAEMST awardee in science,” Long said. “I am honored to be recognized as an educator who values STEM education and experiential approaches to teaching and learning and to be a part of a respected group of educators promoting STEM opportunities for all students. I am proud to represent Springdale School District as a leader in STEM.”

A total of four Arkansas teachers have been selected as PAEMST finalists, according to Stephanie Johnson-Carlton, Arkansas Department of Education Science Program advisor.

Ramsey is the only finalist identified in math for Arkansas, according to an Arkansas Department of Education press release.

Ramsey would be the seventh consecutive Springdale Schools teacher to win the award in math.

Johnny Key, Arkansas Department of Education Secretary, congratulated the 2022 finalists on their achievement.

“Each of you represents the best of teaching within your respective subjects,” Key said in the ADE release. “I want to thank you for your outstanding efforts to ensure your students receive an exceptional education and for serving as models of excellence in Arkansas.”

Each year, a national committee of scientists, mathematicians and educators recommends up to 108 teachers to receive PAEMST awards in mathematics, science and computer science, according to the release. Winners are chosen from each state, the District of Columbia, Puerto Rico, the U.S. territories and schools operated in the United States and overseas by the Department of Defense Education Activity.

Teachers selected as national PAEMST awardees each receive a $10,000 award, a presidential citation and a trip to Washington, D.C., for a series of recognition events, professional development activities and an awards ceremony.

When the 2022 PAEMST winners will be announced is to be determined, Johnson-Carlton said, noting the 2021 winners were notified in February 2022.